To begin, consider a quote from Rūmī, a 13th century Persian poet:

“The Master said there is one thing in this world which must never be forgotten.  If you were to forget everything else, but were not to forget this, there would be no cause to worry, while if you remembered, performed, and attended to everything else, but forgot that one thing, you would in fact have done nothing whatsoever.  It is as if a King had sent you to a country to carry out one special specific task.  You go to the country and you perform a hundred other tasks, but you have not performed the task you were sent for, it is as if you have performed nothing at all.  So man has come into this world for a particular task, and this is his purpose.  If he doesn’t perform it, he has done nothing.”

So how does one discover his particular task, his purpose?  One possible way is through Right Living, the four stages of Life in Hinduism.

Right Living is the life that follows basic principles and questions. There are many ways to live rightly, but first we must ask: why we are here on this earth; what is my purpose in life?  Self-questioning can help correct our way of living. When someone begins to ask “who am I?”, “where do I come from and where do I go after the death?”, “what are the jobs that I should do?”, or “is there any assignment that I unknowly have, given to me by the Divine?”, What is my long-term work and short-term job, and so on. When you ask these types of self-questions then you may start of living right way, and start doing right things in your life.

In Hindu Sanatan Dharma, there are four ‘Ashrams or Vedic life’ based on their individual Karma and Dharma. Simply it is the Vedic Ashram System of right living. In ancient times, almost everyone followed and considered this as a right life.  This was considered as a best life and was well respected in Vedic Society. It was a common life style unless someone was sick, physically or mentally disabled and could not follow a four ashrams life.

What are those 4 stages of life?

Based on Hinduism a man has to goes through four stages of life known as the Brahmachari. These four stages are:

Vanaprastha  – he hermit in retreat, and

Sannyasa – the ascetic stage.
Before we explore details, we must give some thoughts to pre-Brahmacharya stages as well.

It is said that “parents are the child’s first teacher”. Parents play an important role in their child learning and development. Learning happens at the very beginning of the birth of a child, and it happens in every moment of everyday anything parents share with their children.

With everything parents do together with children, they learn about their world. When parent talk, they teach about the sounds of words and the rhythm of language. When a child see parents or others are moving their hands, eyes coordination, holding their toys for them, they learn communications, kindness and helpfulness. All parent’s behaviors are the direct reflection on children’s growth. Early time is very crucial for children as simply they are born on this earth as open minded, and what impression you can give, how friendly, colorful, and how social you are, in your home or with others, effects their life. It also helps them to build a dream world within them.

Normally Children stay up to 10 or latest up to age of 12 with their parents, and after this age, they start their life of Brahmacharya. It is also parent’s responsibility to make them ready by building a kind of freedom and independence within them. Also, it is important that parents teach them how to behave well while meeting others. This is accomplished by: entertaining (singing, dancing, talking or story telling), controlling their four instinct behaviors (sleeping, eating, fear and procreation), and focusing on their reading, mathematical skills. They also focus on physical growth and overall muscle strength, such as running jumping.  Therefor  they can fully focus on their studies within provided criteria of their school (Gurukul).

Thus, when they are age of 10 or 12, they are ready to go to their teacher (school) or in Gurukula. They are pre-matured and can be away from their home, parents and friends. 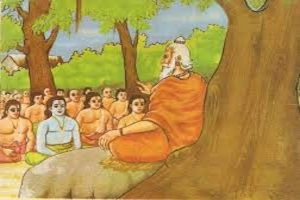 The Brahmacharya stage required great devotion and faith by his Guru, and it goes until age of 24 or if extended up to 25 and the student is trained in both spiritual and vocational life.  This education is for both boys and girls. Some of the Gurukul even accept students from age of 5 and they can complete with age of 19 or 20 as well. Of course, it depends on their Acharya (Guru) and parents’ mutual understanding.

This stage is the first stage outside of the home, and it begins from early age, and last up to 24 or extends up to 25 years. In this stage a student lives with his Guru, leads to the life of student and practices celibacy, training himself to follow the discipline of life, and build wisdom. In other word we can say it is a period of learning or student life. By proper devotion towards his teacher (guru) the student learns the skills of life which helps them for a profession as well as to form the a family, social and religious life ahead.

In this stage one should follow the a proper disciplined life with the guideline of his Guru and perform his duties and practice what the Guru teaches him. This is a time of formal education and the student is educated with various Sastras, Vedas, Upanishads, Mantras, other scriptures, and other wordily knowledge which will be beneficial for building a foundation of his further life of Grihastha Durma.

In this modern era, this can be considered as the period of schooling and up to university studies. It is a self-restraint and moderation of further life. It also helps to develop the basic foundation of which helps to build faithfulness in Grihastha and further to the other stage of life till the Sannyas. 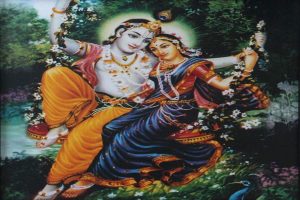 The Grihastha stage of life begins when a person completes the Brahmacharya stage. After his completion of Brahmacharya, one can return to his village. Of course, he could choose other places where he can start of his Grihastha or a householder life and his business life.

With this stage he will now marry and pursue life based on the profession he has chosen.  He deals with the world and performs his duties that are required for his family life.  Importantly this stage is considered as very complex life, as one has to deal with Samsara (the world). One needs to carry out family tradition so that it can move to next generation.  At this stage you have to self-sacrifice and work hard not only for yourself but for your wife, children, and also the benefit of the society as well. Sometimes he is also responsible for the future or life of their own son, or close relatives including brothers, father, mother or other member of the community.

During this stage one should not also only busy with himself or his society but also need to sacrifice and maintain and practice the dharma (service to the society without any expectation of benefits).  He also needs to try what he has learned from Gurukula or from his teacher and apply accordingly.

This phase is considered as crucial and begins when a person has completed Brahmacharya. Usually it starts from age of early 20 or latest 25, and lasts to 50 years or latest up to 60 years of age, depending on, and considering his duties towards this family and society. At last, once a person reaches 50s, he needs to prepare to leave his home and journey to the forest or Vanaprastha stage.

Vanaprastha: The Hermit in Retreat 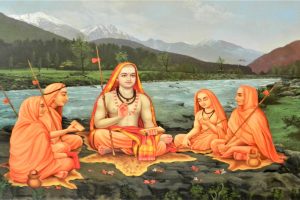 Once reaching this stage, the person’s duty as a householder and the pursuit of material life ends, and one should be ready to leave behind his secular life, duties and responsibilities, and start to devote more time to spiritual practices.

Simply, his children are grown and he is now able to handover the responsibilities of home to his son or daughter as well as his business.  This passes to his followers and younger generations.

While in this stage it is also possible that one may not leave home or community, but start to live away from the all attachments and start contributing to the community by volunteering in the field they expertise. They might also take a pilgrimage or choose some ashrams in which to live. Their main purpose of reminding life to live as a seeker of the truth, peace and freedom. They can teach dharma, chanting or practice meditations for self-inquiry, and discover what is the true nature of own existence or oneness.

The hermit is allowed to take his spouse along with him but the idea is maintaining little contact with the rest of the family. 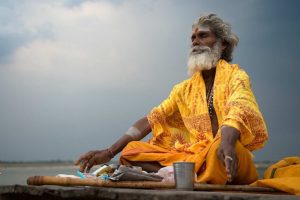 This is the 4th and last stage of life and comes when a person is over 70 or latest from age of 75.  And it last till he or she dies.

To become an ascetic, one should be completely free from all the worldly attachments. In this stage, a person is supposed to be totally devoted to the God.  He is now known as sannyasi.  He has left everything including his home, and other possessions; he has renounced all the desires, fears, hopes, duties and responsibilities. One should or at least practice controlling his five sensory organs and virtually merged with God. It is a renunciation of Dharma (righteousness, moral values), Kama (pleasure, love, psychological values) and Artha (prosperity, economic values).

Ascetic man, who has broken from his worldly ties or pleasures, has his sole concern to become attaining Moksha or realize from the circle of birth and death.  He does not wish to be with anybody and gives his self and whole lives in a world of his own.

This sannyasi may live alone in the forest or in Monastery or Ashrams, and can study scriptures

Sadhana Circle is a spiritual team and social network!

Yoga – and way of doing and Understanding!